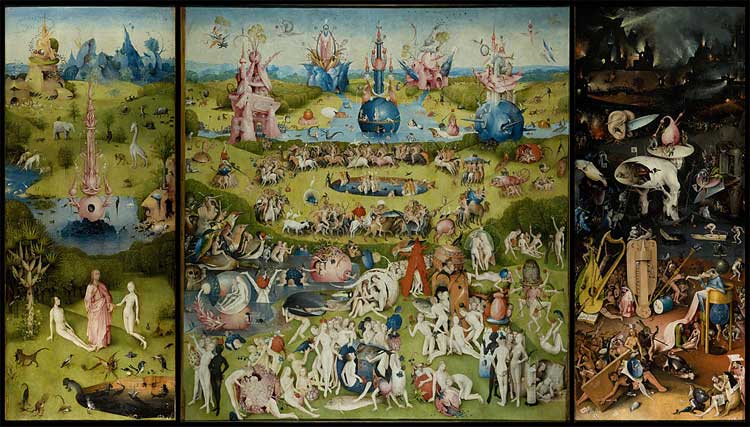 In early 2015, I was invited to a popup art show in San Francisco’s Dogpatch neighborhood. My good friend Megan, an actor in the event, described it as a living replication of Hieronymus Bosch’s triptych “The Garden of Earthly Delights.” Intrigued, I came up from Santa Cruz and attended, imbibing from my stashed whiskey along the way. But the event seemed to only focus on the center and last panel, forsaking the first.

The bulk of the popup took place in a wonderland of whimsical sensory activities. Attendees bounced from exhibit to exhibit touching and tasting as they went. A pomegranate goddess, Megan only tittered with coy laughter when anyone approached her, and she did the same when I offered her whiskey, merely lifting the hem of her flowing dress to reveal she had her own strapped to her leg. She extended her arm, crimson juice dripping from between her fingers which cradled ripe, too ripe, pomegranate seeds. I watched as others freely plucked them from her palm and I smiled weakly as a voice bellowed behind me, “Enter the next chamber for the final event.”

The “next chamber” was a dark, undecorated portion of the Dogpatch warehouse. A choregraphed fight between a demon and angel took place in silhouette behind a lit screen. For the life of me, I can’t remember who won or who was supposed to win or what the accompanying voice-over told us. Instead, I drank covertly from my whiskey bottle and wished we were still in the garden instead of trapped in this boring darkness.

But the ‘final event’ didn’t last long and we were released into the unadorned front of the warehouse. After cleaning up, Megan met me by the entrance and whispered into my ear, “I’m in love with the angel from the final battle, but he’s not in love with me—I know he isn’t.”

Between the year 1490 and 1510, the Netherlandish master Hieronymus Bosch painted “The Garden of Earthly Delights.” The timeline is important since Bosch created this work at the tail end of the Dark Ages—a pejorative epithet referring to the general lack of culture. Bosch’s ‘The Garden of Earthly Delights’ was named posthumously, much like Earth itself—especially if you take Nietzsche’s assertion that God is dead literally. It’s a fitting moniker for that reason, but the title fails to illustrate the full contents of the triptych, instead focusing on what the left and center panels depict.

The panel on the left of the triptych, the first panel the popup art show failed to acknowledge, shows an idyllic garden devoid of humanoid presence save for the forms of a man and a woman separated by a Christlike figure taking the woman’s pulse. Even sans title, the portrayal of the two with the strands of their respective heads of hair untouched by even the gentlest breeze would be enough to let anybody know that this is the Garden of Eden, before original sin. Before Adam and Eve went astray. Before they knew to be ashamed of their bodies. Before Adam and Eve walked east and away from paradise. Plus, there’s a unicorn.

And yet, the next panel shows a lush garden not unlike the one from the first panel. If not the same garden, then it is certainly an extension of it, a continuation of the paradise God created and then cast Adam and Eve out of for craving knowledge. This lush garden is full of different kinds of lushness, though. It is lush in all senses of the word: imbibing bodies in textured layers fill the vibrant green until it’s only hinted at in the background. They are all “knowing” in the biblical sense. If unicorns are a universal symbol for purity and goodness, then it’s telling that they’re present in the first panel and absent in the center one.

But I knew something was wrong—that there was something wrong with me—and yet, I couldn’t tell exactly what. Hanging on the wall in front of me was a television, but there was something wrong with it too. A ghostly copy superimposed over the standard set, crooked to an angle and faded away into burnt cream walls. Oh, boy. Was the TV the problem, or was it me? Had I ever trusted technology to stay true to my senses? The left side of my face was numb. Was it the right or left side that had never worked right? Didn’t I get punched in the face when I was seventeen? Which sinus did it collapse? Probably not relevant, but the numbness couldn’t be a good sign.

I’d like to think Bosch made the center panel as large as it is because it’s the only part of the piece we can be sure happened—is happening. Whether there was an Eden, is a Heaven or Hell, or whether or not a spiritual apocalypse is destined to befall us, no human can be certain. And, much like the cryptids of today, there are three equines with horns protruding from their foreheads hiding among the bodies in the center panel; they are not unicorns although they could be mistaken as such. Their horns are neither spiraled nor the same thickness and length as the unicorn’s from the original garden.

All we human beings do know in this life is what we can see—what is happening around us. There are no unicorns, though sometimes we tell ourselves lies. And we are always tasting the wine to see if it is excellent—even when we know it probably isn’t.

Five months after the Dogpatch warehouse, I fell twenty-five feet out of a tree. If the second panel of Bosch’s triptych is the depiction of humanity falling from grace, forsaking God and divinity, the perversion of the first panel, then surely my fall from a redwood was the equivalent.

Drunk, always drunk, I had fallen and retained no memory of what happened. But isn’t that just like God—to punish us for something we don’t even remember doing?

It’s the final panel of the triptych I’ve always found the most compelling—the most mystical and mesmerizing. There’s a figure with the musical staff tattooed on their butt being crushed by a giant lute. Is it a punishment for defacing their body, the house of God? Believing their music to be on par with angels?

Nearby, a humanoid bird art scholars have sometimes referred to as ‘the Prince of Hell’ swallows a person whole, a person who must have foolishly clipped the wings of swallows and put them in a cage—enslaving God’s creatures for selfish enjoyment. Or maybe the person was a magician who abused doves and qualified as a false prophet. “Now the Prince of Hell will make you disappear.”

In the upper portion of the third panel, a phallic knife with ear testicles crushes a collection of bodies, male I assume, who probably never made this connection: “we have two ears and one weapon.” They probably should’ve stopped indiscriminately “knowing” to un-weaponize their member and give listening a try. Perhaps it meant the only thing men have between their ears is…a dull blade.

Maybe Bosch just painted the third panel after a Dark Age fever dream he thought had come from God. Or maybe he consciously decided the end was already upon us and what was happening in the world was proof.

Most interpretations of the triptych I’ve come across view the final panel as the closing to a warning against excess, a tale of punishment for living a hedonistic existence and discarding the glorious garden and righteous rules God-given to us from above—from our betters. In this context, “earthly” means human fallibility and the tacit ending to the title becomes “and Post-Earth Punishments.” The presence and absence of the unicorn supports this reading as Bosch’s intent, especially given the years during which he purportedly painted it.

After a 10-day coma, I learned to think again. Megan visited me in the hospital and sketched me with my abysmal hospital haircut. She also brought me graphic novels I couldn’t read because of my double-vision. Whenever I spoke, I slurred, wheezed, and forgot what I was trying to say. I couldn’t walk.

If Hell is our excess turned inward, then surely I was in it—forever drunk with none of the fun.

But maybe the triptych’s title is apt on its own and there is no tacit addition—perhaps we’ve all been thinking too linearly, too egocentrically, about it. Maybe the delights aren’t ours but rather the viewer’s. And that entity takes pleasure in every moment of the human experience—creation and destruction.

The “earthly delights” are everything on all panels contained in the triptych that, once closed, compose the innards of an innocuous gray proto-Earth in the early days of creation—plants and water sans animals—on the outside of Earth’s enclosure. The creation happens anew every time the triptych is opened. The delight is the taking in of an artful tragedy and the dramatic irony of panels facing without seeing, a birth, death, and rebirth with every movement of the work.

But then the triptych finally closes—or remains open—forever and the viewer, the entity, grows weary and moves on to “a hell/of a good universe next door.”

Nearly five years after my fall, I hide my deficits well. An eye surgery fixed my double-vision and I only fall down when I don’t focus on my feet’s movements. If you met me, you wouldn’t be able to tell I ever had an accident; my scars are internal, the lacerations neural.

In the rare instance an acquaintance notices I can’t carry liquid without sloshing or the inconsistency in my gait, I casually say, “Oh, I was in an accident in 2015.”

My disability is invisible and they can’t see me search for words only to let them go. I’m just another person; there’s another one next door. They move along.

The triptych first entered Spain as “La Pintura del Madroño,” the painting of the strawberry tree, in 1568. It remained at El Escorial monastery from 1593 until it was moved one last time 342 years later in 1939. At the beginning of World War II, “The Garden of Earthly Delights” landed in Madrid’s Museo del Prado. Still there, it stands open wide, an infra-red reflectograph and X-radiograph alongside it to show how much it has changed since its inception—how far it’s come.

Brooke Knisley is an instructor in Emerson College’s writing studies program. She is working on a memoir about trauma and its damage. You can find her on Twitter @BrookeKnisley, on Instagram @redheaded._.stepchild and at brookeknisley.