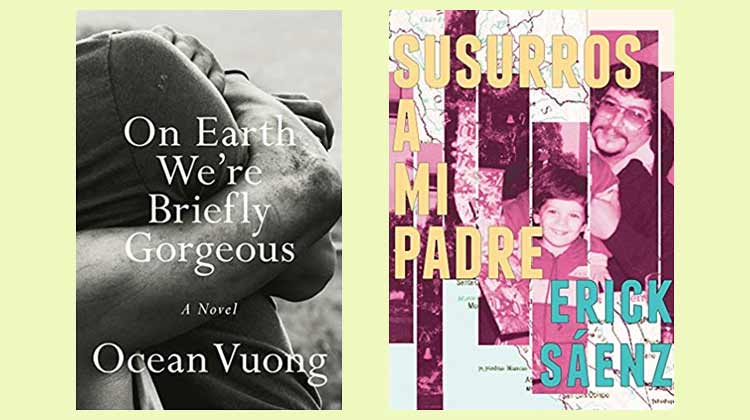 Written as a letter to his immigrant mother, Vuong’s novel is poised to make him a literary phenomenon. Already a significant force in poetry, 2016’s Night Sky With Exit Wounds launched Vuong forever out of the underground, winning that year’s Whiting award, and landing on year-end lists compiled by the New York Times, NPR, and the Boston Globe (among others).

Ahead of its release, On Earth We’re Briefly Gorgeous has been called “the most anticipated Business Relationships of 2019” not only by The Millions and Lit Hub, but by Huffington Post, Esquire, and Buzzfeed. Because most of my friends are librarians (I am, after all, a punk, and poor), I was able to grab a galley copy before it came out.

The hype is justified. Often, I found myself stopping, alarmed by the shocking turns in Vuong’s prose, as when he describes eyes “like chipped glass,” or a country as “a life sentence.” Picking my copy up now, on one of the many, many dogeared pages, I found this passage:

The veins green over his wrists, the boy raises an M-16, blond hairs sweated brown along his arms. The men are drinking and laughing, their gapped teeth like mouthfuls of dice. This boy, his lips pulled at an angle, green eyes filmed pink. This private first class. The men are ready to forget, a few still have the scent of their wives’ makeup on their fingers. His mouth opens and closes rapidly. He is asking a question, or questions, he is turning the air around his words into weather. Is there a language for falling out of language? A flash of teeth, a finger on the trigger, the boy saying, “No. No, step back.”

Vuong’s prose pops with saturated color, images standing in jarring relief next to each other, like mouthsful of dice. It’s a tightrope act, nearly every sentence leading, by its end, somewhere previously unknown.

But when I came to the passage on Barthes, I couldn’t help but be taken out of the novel. The section seemed to describe something else I had seen recently, the opening of another recent poetry book, Susurros a mi Padre, by California Latinx author Erick Saenz.

Published by The Operating System in 2018, the heart of Susurros is laid bare in its frontispiece: the alphabet. Immediately following the book’s title page, the reader finds a small block of text divided into three rows, ten letters in each. Along with the 26 Latin characters used in English are four printed in bold: the che (CH), the elle (LL), the eñe (Ñ), the erre (RR).

As with On Earth We’re Briefly Gorgeous, Susurros a mi Padre is a son’s attempt to reckon with a parent, and a parent’s language. In Saenz’s case, it is a father. In a section titled “[CROSSINGS],” Saenz’s describes his father’s brief first stint in America:

They would stay in the United States for a year before my grandmother decided she did not like the US. I press my mother and she discloses that family dynamics were strained, the house too crowded. I suspect she never fully assimilated, didn’t want to…4 went back to Mexico, including my father.

The elder Saenz eventually moved back, settling in East LA, where the author was born and lived his early years. As a child, it is the family’s move from East LA to suburban Whittier that strikes the first blow on his umbilical tie to Spanish. Replanted in a primarily white city, Saenz had no choice but to enroll in an all-English school. His mother’s explanation, quoted in the book, arrived via text message: “no bilingual allowed at the time.”

Throughout Susurros, there is a sense that we are seeing the author’s loss of language, experiencing it in the moment. While Vuong’s prose unspools in shocking color, the language of Susurros is chunky, a concatenation of images, memories, and interjections about the author’s process. Splitting these from one another are a variety of punctuation marks: asterisks, line breaks, brackets, and (the author’s favorite) a pair of forward slashes—a typography which recalls a knife cleaving along a demarcation, searching for a clean cut.

In a section titled “//Con Vergueza” (“With Shame”), Saenz recalls moments of translation with brutal simplicity:

…when I have to translate for my white co-workers at the continuation school in Salinas. They speak little Spanish, just enough to pass it on to someone else. I tense up whenever the phone rings when ‘uhn mo-men-to’ echoes in the halls. My body stiffens when parents wander in, questions that beg complicated answers.

In one of the book’s earliest passages, Saenz’s searches for his Spanish-language preschool, the site of one of his earliest memories:

I try researching the school online. Like my native tongue, the site no longer exists. Memory // dream. What severs the two?

Susurros traces these lines of severances and sutures. Lacking a complete alphabet, it proceeds in a whisper, stitching together words overhead, words issuing forth from memory, words unsaid and untranslated.

“But what,” Vuong asks, “if the mother tongue is stunted?”

The answer, Susurros suggests, is a whisper.