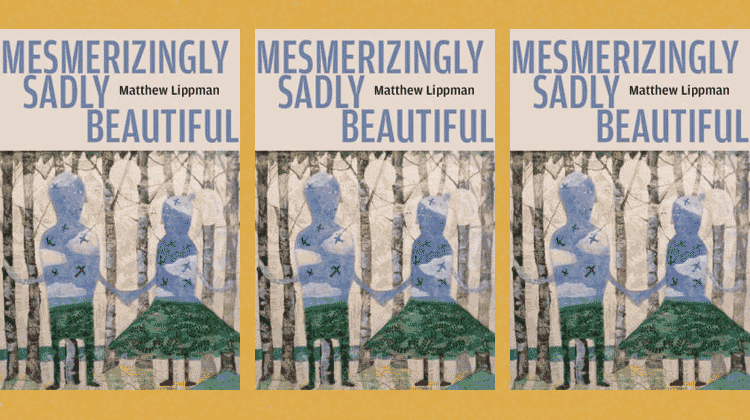 The award-winning poet, Matthew Lippman, has won yet another award, this time the Levis Prize—judged by Dorianne Laux—for his sixth collection, Mesmerizinlgy Sadly Beautiful. It’s a rollicking, wistful, and at times frenetic book that explores family life, sex, politics, race, friendship, and religion in a way I guarantee you’ve never heard before.

For example, the hilarious title of the first poem—”If You Don’t Want Your Kids To Have Sex Don’t Finish The Basement”—reads like a Raymond Carver story if Raymond Carver had been Jewish. The title is a line of remembered dialogue spoken by a guy named Lev at a dinner party where there’s beer, wine, and gluten-free challah. Lev begins talking about his kids while Matthew’s are in the basement playing ping pong. Basically, that was the whole story he lets us know, but “The other story is that when a guy says something like that / you have to remember where you were when you first had sex.” You can jeté in time, in flighty thought, through this narrative and end with the tenderest moment that, if I gave it away, would surely be a spoiler.

The joy of reading Lippman is that his poems embody the sorrow and hope of country music if country music was Lorca-like. “Someone Will Love You Many Times” is a giddy list of all the ways you could be loved and by whom, such as “Over and over and many times love will come at you / from a rooftop with billowy sheets / and Miley Cyrus will love you / and so will Spiro Agnew.” You just have to smile through this poem where you will be loved “from pockets and sandwiches…” You can’t read this without feeling that you are loved by someone, by everyone, even by you.

What’s so rare is that Lippman is a male poet of parenting who makes you laugh with recognition. In “Hours And Hours Of Glass,” Lippman laments “That’s one thing about being a parent / that no one ever mentions. Massive consumption. / An endless loop of Western Civilization / of American thievery and piggery. / Twelve acres of Ho Hos.” In “Strike A Pose,” the title from Madonna’s iconic song, he writes, “Your kids knowing good damn well / that when they wake up / you’ll be in the kitchen making the peanut butter and jelly sandwiches / for lunch / no matter how sick you are. / no matter what the disease.”

Both as a parent and as a teacher at Beaver Country Day School in Brookline Massachusetts, Lippman is not only concerned with his own children but the lives of all children. “The Age Of The Bullet” begins “Forget the Age of Enlightenment. The Industrial Age. / This is the Age of the Bullet.” He delivers the shot to the heart by taking a surreal, absurdist stance, such as “These days bullets sprout other bullets in the bullet garden.” He ends with the story of a boy who was shot the day before graduation that is heart-wrenching.

In “Revolutionary Sexuality,” he writes about his love for his pal, Ed, how they lie down together outdoors, a manly, platonic love that is rarely expressed. “The stone under our butts is cold / and we can feel the whole history of revolution in our ass cheeks.”

We’re always hearing music in Lippman’s poetry. Sometimes he’s listening to Veedon Fleece, Van Morrison, or a Wurlitzer at the fingers of Bernie Worrell. His lines quiver with jazz and crescendo.

Mesmerizinlgy Sadly Beautiful is wonderfully accessible and covers the spectrum of art, culture, and human emotion.

Rochelle Jewel Shapiro’s novel, Miriam The Medium (Simon & Schuster), was nominated for the Harold U. Ribelow Award. She’s published essays in NYT (Lives) and Newsweek, and in many anthologies. Her short stories, poetry, and essays have appeared in many literary magazines such as The Iowa Review, Los Angeles Review, The MacGuffin, Memoir Journal, Moment, Negative Capability, Pearl, Pembroke, Pennsylvania English, Peregrine, Ragged Sky Press, Rio Grande Review, RiverSedge, Schuylkill Valley Journal Of the Arts, The South Carolina Review, Stand, Studio One, and Thema. Her essay, “Eulogy for My Mother,’ won the Branden Memorial Literary Award from Negative Capability. She teaches writing at UCLA Extension. Find her at rochellejewelshapiro.com and on Twitter @rjshapiro.