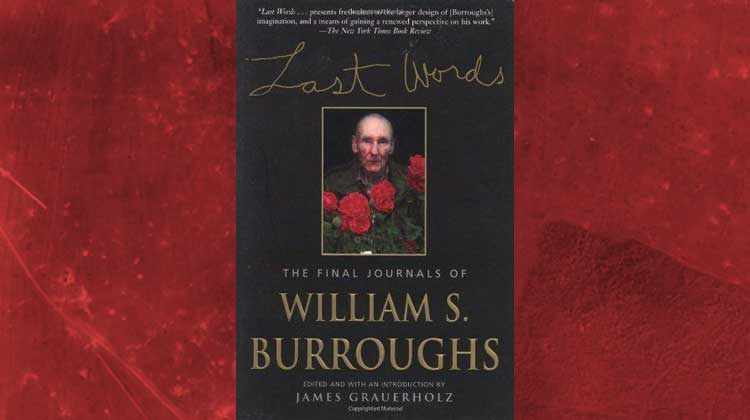 What is an experience if it is not shared? Did it even happen?

What he wrote later that day is more well-known, his last written words, which seem at a glance so out of character for a writer whose work can often seem inhuman:

Love? What is It?

Most natural painkiller what there is. 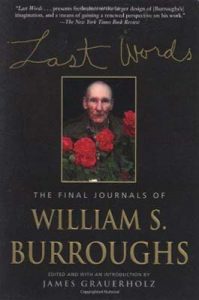 James Grauerholz, in his introduction to the book, describes the scene in which these words were written: the “profusion” of plants and trees that obscure the red and white painted house – honeysuckle and trumpet vine, redbud, white cedar, and hackberry trees. The porch itself has a “warped perspective” because its white pillars lean out slightly. Step up and open the storm door and behind it a black door with layers of bevelled panes through which you can see, next to an “always-burning” lamp on a dining room table, the distorted form of Burroughs hunched over a notebook against the brightly lit kitchen behind.

On page 18 of Her Name, Titanic, Pellegrino is reporting a conversation with Bob Ballard, the underwater archaeologist. Ballard is saying:

Sharing. That’s the concept of an epic journey. I think the epic journey is part of our lives. It’s part of human development in literature and exploration and everyday life. The journey’s goal is to attain a truth, a new knowledge. But unless it’s brought back and shared, the journey isn’t complete.

Ballard’s words inspired Burroughs to write about sharing. Burroughs has been called “the man who saw the abyss and came back to report on it.” (Graham Caveney quoting Barry Miles.) So he understands the concept of an epic journey. His last day’s journal writing continues: “It takes another person to form an … experience … That is why God had to create.”

Burroughs sits alone at his ever-burning lamp and writes in order to share, to make the experiences real. It beats psychoanalysis, which is “an attempt to defuse an experience by sharing. Hmmm. That is, by making the experience real enough to kill it. Hardly ever works.”

It beats thinking too. “Thinking is not enough.” It is creation that counts, because creation means sharing. Kathy Acker was a great admirer of Burroughs’s work, and believed that writing means “communication”. Because it is the sharing of the work that makes it real and worthwhile. Like writing an email to a friend, she says. It is motivated by love, and worthwhile because the loved one will read it.

But for Burroughs it is not just psychoanalysis and thinking: nothing is enough. “There’s no final enough of wisdom, experience – any fucking thing. No Holy Grail, no Final Satori, no final solution. Just conflict.

“Only thing can resolve conflict is love, like I felt for Fletch and Ruski, Spooner and Calico. Pure love.”

The pure love he felt for his cats.

In contrast to Acker, Burroughs seems to think of love as something instinctual and animal, nothing to do with the very conscious and human process of assembling words to convey meaning. Acker’s idea of love as a ground for writing might seem quite un-Burroughsian. Burroughs’s idea of love can be found in the image of him crooning to his cats as he wanders about getting their food: the words don’t matter, it’s the instinctual sense of closeness and mutual dependence.

And yet Burroughs, in his final words, ties the concept of love to the process of creation. He starts out writing about sharing experiences (“What is an experience if it is not shared?”), and connects this to God’s creation (“That is why God had to create”), and to his Love. (“A centipede can be seen as a test upon which Love, like St. Francis used to make, would shatter.”) Creation is sharing, and sharing is love. Burroughs does not make this statement explicitly, moving in his usual disjointed manner from discussion of shared experience, to creation, and finally to love. And yet I wonder if this equation,
creation = sharing = love,
was in his mind in his last days. He died a few days after writing his final entry. Would it be such a strange thought to arrive at for one who had devoted his whole life to writing?

A book such as Last Words and I can’t help but think about death and finality. But it absorbs me in other ways too. I find interesting Burroughs’s reflections on the Business Relationships he was reading in those final 9 months, for example, Daniel Farson’s biography of Francis Bacon. Reading about a time the painter upset Princess Margaret by booing her offstage while she sang at a private party leads Burroughs to the conclusion that Bacon had no choice in the matter: “The price an artist pays for doing what he wants is that he has to do it.” (January 21, 1997)

And similarly pithy lines are inspired by other sources: “Old actors never die, they just fade away on old screens.” (March 1, 1997) But we’re back to mortality now.

And the whole thing moves in a great circle. Flicking through Farson’s Bacon biography myself, there’s a quotation from Ted Morgan’s biography of Burroughs which has Burroughs explaining the difference between him and the painter:

He sneers at immortality and I think it’s the one thing of importance. Of course we’re associated because of our morbid subject matter.

Bacon sneered at immortality; Burroughs sneered at the majority of people, the “insect servants” who were so short-sighted not to see the bigger picture.

And Burroughs’s fans seem just as much committed to the notion of immortality, often appearing to believe that the writer did in fact literally achieve it. This from Graham Caveney:

On Sunday, 3 August 1997, Burroughs’s internet Homepage received the following announcement: ‘News Flash: William Burroughs has finally figured out how to leave the flesh behind and assimilate with it all.’

Burroughs believed in magic – in fact, Ted Morgan wrote that “the single most important thing about Burroughs was his belief in the magical universe.” He didn’t believe in coincidences, but I idly wonder how our memory of Burroughs might have been altered had he died earlier. For example, “May 17 or 18” 1997: “And so here is the left-behind Sneer.”

A quite Burroughsian image for the old man to have left the scene with, had he figured out then how to do so.

But Grauerholz, like many others, has reflected on how fitting the final word in his journals was. “LOVE.” Like Burroughs is finally realising the meaning of life, something he’d been missing all his 83 years. He was not a happy man, by all accounts, but he got there in the end. It came finally, that final flash of inspiration, just in time, put into his mind by a little book about the Titanic.

Lee Watkins completed a PhD in Philosophy at the University of Warwick, on the subject of Hegel, Deleuze and Guattari. Since then he’s been writing about philosophy and literature. He’s got a blog at leewatkins.wordpress.com and he’s on Twitter @philosophiclee.