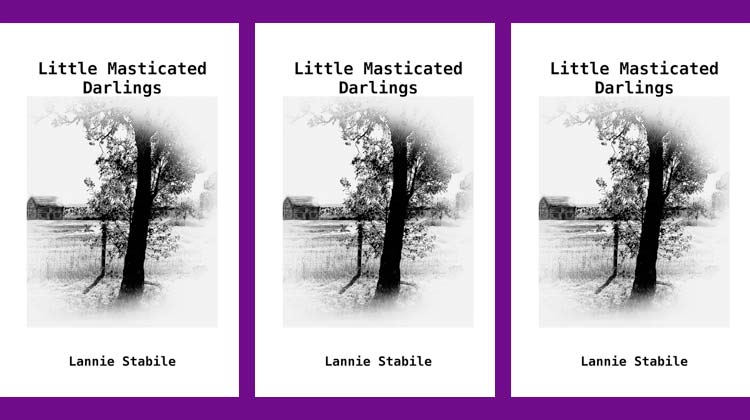 Memory is fragile and unreliable. We know this as studies have shown a distinct relationship between the called recollection of memory and its silent, persistent alteration. Simply, each time we pull memory from a corner of the mind it changes. So we write letters and journals. We take photographs and paste them into albums or allow them to sit unremembered at the bottom of an old drawer.

Lannie Stabile’s Little Masticated Darlings begins with a photograph. Or perhaps a memory. It can be difficult to untangle these things. But it begins in the space habited by that moment of recollection. The spark of seeing yourself, but differently; from a question about why this process works the way that it does. The ten poems included in this short volume form a quilt-like process—the stitching together of things disparate and yet intimately connected, forgotten.

The opening poem, “And you unearth a photograph of your past and a stranger…”, begins in this interstice between knowing and understanding. A photograph. A jailhouse. A mother only willing to provide a name. And of course, it is not enough,

How can typing words can lead to the consideration of, as Stabile phrases it at the close of the piece, “the transference of sin”?

It is striking, then, that the word “sin” is not repeated even once in the following pages. Soon, we’re past calling the thing by its name—it is pervasive. The question of proximity is entirely concerned with the esoteric self. The book inhabits a space that is not-quite possibility. Approaching a defined genre of “what-if?” As if desiring to destabilize the proximity one feels to evil. As the book moves forward it touches upon many elements of a constructed self. Reportage, record and fear becoming tools to determine contamination. The suggestion bears down that being honest about one’s proximity to evil is the only way to create distance. From the repeated observational “Such a mundane thing to do” in the poem “August 31, 1985” a certain pattern emerges: We’re walking through stages of grief—the loss of an innocence that was only understood as lost in a sudden reminder.

This small volume is a sea of movement. As the wave begins to crest with the introspective, judgemental “What Do You Say About a Crime That Happened Before You Were Born?” The poem begins to spin itself into embracing what has been danced around within the previous pieces—guilt, terror; the questions of why not or just why. As the poem makes clear, arms are outstretched—that disassociation “obsessed with a spirit you didn’t know”.

In a similar way, the penultimate poem in the small collection, “I’ve been held by a serial killer.”, comes to a moment of high-tension which breaks itself. Like both legs running as fast as they both can toward both an understanding of one’s past and the distance required to find a sense of clarity. Which is what clarity is—opposite of sin; coeval with the present. Held by a serial killer “L-like a lover? he stammered. // Like a father.”

One must hold another’s sin at distance from one’s body. This is not religious, but merely hygienic.

Arm’s-length. A way to hold something so far from the body it becomes part of an ocean. Grief ends with acceptance which is often the same as disengagement. In each case we understand that something past and external is not our own to possess and shape. What do you do with a photograph from the past? You leave it there because it is not something that belongs to the present self. The closing poem, “Maybe it isn’t my story” consumes its own wiggling word: maybe. Maybe but yes. Another way to make a distance between two points appear farther apart. Anything to avoid the transference of sin.

Danielle Rose is a poet whose work can be found in The Shallow Ends, FIVE:2:ONE, Sundog Lit, Pidgeonholes, Glass Poetry, and elsewhere. She studied with Carolyn Forché at Skidmore College and lives in Massachusetts. Her debut chapbook, at first & then, is forthcoming from Black Lawrence Press.