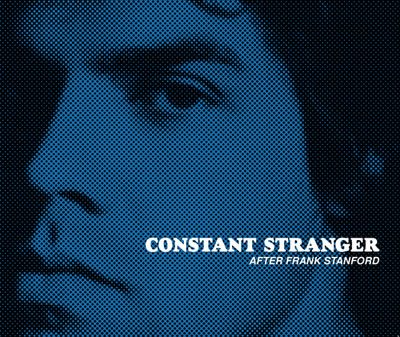 In the early 1970s, a poet from the Mississippi heartland, expatriated to the Ozark scenery of Arkansas, would help shape the world of contemporary poetry. A poet who wasn’t afraid to shed his smile like snakeskin and open a frown instead. A poet whose themes weren’t afraid to redefine existentialism. A poet who wrote cult-classic epics such as, The Battlefield Where the Moon Says I Love You.

Constant Stranger, at first glance, may seem to be a tribute, a literary memorial to the man himself. However, from the start of Aidan and Max’s introduction, one can see much more than an homage being paid. Constant Stranger is a massive séance and each poet, in their own way, conjures not only the ghost of Frank Stanford but the ghost of his looking glass.

Throughout the anthology, a geography of language is explored. From territories of sentences longing to be finished, to states of consciousness waiting to be unraveled, this isn’t meant to solely honor the man, but the mythology behind the man. The work itself creates an ecosystem of its own design.

The Light The Dead See
Tributes

The re-imagination of being was a theme that rang true through much of Stanford’s work. The poem (same as the title of this section) “The Light The Dead See” is a perfect example of such, and contemporary great, Terrence Hayes’ poem, “Frank Stanford As A Child Of Alphabet City” kicks off this literary coven.

A similar tribute is made in “Trance” one of the three poems excerpted from C.D. Wright’s Terrorism.

Night and all morning she weeps

In these mere samples of work the wondrous, humorous, hypnotic, and musical nature of Frank’s influence can be found. Throughout these starting tributes there are unrequited memories expressed from Leon Stokesbury; field note visions recorded by Forrest Gander; graveyard reunions gathered from Ada Limón, and so much more. Each poem is trying to submit memory and image as a form of post-mortem offering.

Let Me Be Here As Well As There
Recollections

In this portion, there is a pit-stop between the poetry, in the form of scrapbook dialogue and fond-flashback monologues. Although the technical genre of this section would fall under non-fiction, in each of these pieces poetry still finds its way to slither through the concrete language and consume these pages with lyrical form. From a short interview excerpt with Ralph Adamo, to a memorial of words from one of Stanford’s closest professors, Leenus Orth, poetry is there. Of all of these non-fiction pieces, Ginny Crouch Stanford’s account of her husband’s legacy, entitled “Requiem: A Fragment,” is a true showcase of poetic language and non-fiction meeting their crossroads. This piece is almost hybrid in its use of repetition with the words “I remember.”

I remember him smiling in the front yard, his teeth white and gleaming. Then I remember the morning in November, after the woman, when he put his head in my lap and cried.

I remember we loved each other.

I remember. He kept the moon in his back pocket, I saw it when he bent over to lace his boots one morning. He was leaving for work, surveying in Carroll County, and his mind was on the job.

Ginny’s “Requiem,” in a similar vein as the rest of these recollections, is supposed to be a piece of non-fiction, but ends up expressed as an mystic elegy instead.

Taking a slight detour, a different concept emerges, as the international influence of Stanford makes its presence felt. The whole section is a series of side by side poetry translated by renowned, international sensations, Patricio Ferrari and Graciela S. Guglielmone with one page in English and another in Spanish. The translations are a powerful demonstration of Stanford’s global influence, and that a legacy can’t be bound to one solitary language. Poems such as “Plowboy” (translated as Joven Arriero) showcase this side by side transcendence:

What Some Men Can’t Know They Gnaw
Studies

In this section, there is a different standpoint, than the previous selection of commentary; a greater focus on he standpoint of the reader, the contemporary, rather than the close friend, the loved one. One piece in this section that truly sticks out of all is A.P. Walton’s literary rogues gallery, “A Compendium of Characters In Frank Stanford’s Poetry.” From an assortment of friends from multiples walks of life like Bobo Washington & Bill Willett to a boozy blues musician & war veteran in Dark/Tom Beck to the supposed “King of Rock ‘N’ Roll” Elvis Presley, to famed boxer Sonny Liston, to the constant Allegory of Death itself; if you haven’t read the poetry of Stanford at this point, this consortium can give a real glimpse of the characters that illuminate this wondrous, yet mystifying universe.

Last Gift To The Cities Of Loneliness
After Stanford

In the final stretch of the anthology, the last attempts to bless the dead are marked in words from a multitude of poets. Poetry ranging from the experimental structure in Canese Jarboe’s “Dark Acre,” the micro-poetic lunar musings from Max Crinnin’s “Untitled” to the haunting, imagery in Jody Stewart’s “My Raven, My Leopard,” the imaginative, wandering prose in Anya Groner’s “Wood Swallow.” Poems such as Noah Falck’s “Still Being Beautiful In Your Shortness of Breath,” resonate the supernatural viscera that slipstreams through the Stanfordverse and shows us the razor edge of its cosmic canvas:

appear, disappear
on the ghost horizon
so far from home
it’s like a goodbye
in a fairytale
no

more like the gesture of looking
down during a séance

In this “last gift” there is a final exchange of reverence between the contributors and the man they’re contributing for.

Through and through, no matter which realm the reader enters, they become submerged in a mythology crafted for this modern age. Like Frank Stanford, the anthology made in his name isn’t afraid to breathe underwater, or howl at the moon, or observe a menagerie of faces, or survey the ghosts that roam the terrain inside us all.

Jared Benjamin (also known by his pseudonym J.B. Stone) is a neurodivergent writer and slam poet from Brooklyn, now residing in Buffalo, NY. He is the author of two digital chapbooks, A Place Between Expired Dreams And Renewed Nightmares (Ghost City Press 2018) and forthcoming, Fireflies & Hand Grenades (Stasia Press 2019). His fiction, poetry, and reviews have appeared and.or forthcoming in BlazeVOX, Maudlin House, Occulum, Peach Mag, Bone & Ink, Breadcrumbs, Crack the Spine, Glass: A Journal of Poetry, and elsewhere. You can check out more of his work at jaredbenjaminstone.com and more of his tweets @JB_StoneTruth.