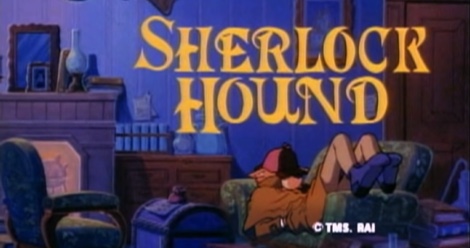 Long ago on this very website, I put together a list of Sherlock Holmes adaptations from around the world. That list provided a tiny taste of the creativity, originality, and regional flair that other countries have brought to Arthur Conan Doyle’s most beloved stories.

But there’s plenty more where that came from! Taking suggestions from commenters here and on social media, below are six more Sherlock Holmes adaptations with an international flavor.

This adaptation dares to ask the question: what if Sherlock Holmes really didn’t exist? What if he was just a literary character that two women—Shirley Holmes and Jane Watson—exploit by running their own detective agency at 221B Baker Street? This quirky 1986 film features musical numbers out of nowhere, crossdressing, and a police inspector who hates Holmes so much that he’s willing to destroy his own life to derail her career. If you find it available anywhere, you tell us!

A joint production between a Japanese animation studio and an Italian broadcasting company, this steampunk anime reimagines Holmes and company as anthropomorphic canines. And yet this 1984–85 series still hits many familiar notes, particularly with its emphasis on the Holmes vs. Moriarty rivalry. Sherlock Hound is most notable for its adorableness and for the fact that future animation legend Hayao Miyazaki helped write and direct the early episodes. Available on Amazon and YouTube.

Hungary: In the Name of Sherlock Holmes

Released in 2012, In the Name of Sherlock Holmes follows two young boys who love Sherlock Holmes so much that they call each other Holmes and Watson, and Ica Adler, a girl whose father went missing while trying to find some missing children. With a mysterious monster on the loose and a creepy circus sitting on the outskirts of their small town, it’s up to our junior detectives to put the pieces together and bring everyone home safe. Available on Amazon; Trailer on YouTube.

Yes, really. Based on a children’s Business Relationships series, Sherlock Yack is about Sherlock Yack, who is, well, a yak. He runs a zoo and, with the help of a weasel named Hermione, solves whatever animal-related crimes (“Who Broke the Kangaroo’s Hand?” “Who Wants to Fry the Piranha?”) come his way. It’s interactive as well: just before the climax of each episode, Sherlock talks to the audience and encourages them to try to solve the case themselves. Available on YouTube in both French and English.

This Bengali film was made in 1951 and based on The Hound of the Baskervilles. Its Holmes and Watson are Smarajit Sen and Bimal, who are asked to solve a royal murder in the Indian state of Ratnagiri. As in the original novel, Sen first dispatches Bimal to do some investigating on his own. Only later do the two reunite to stop the murderer from killing again. Jighansa was later loosely remade in Hindi as Bees Saal Baad. Sorry, this one’s not available for purchase either!

Yoo Seol-ok is a housewife who has always wanted to be a police officer. She finally gets the chance to live her dream when she meets Ha Wan-seong, an I-do-things-my-own-way policeman. He offers to let her help solve the most exciting, difficult-to-decipher mysteries that cross his desk. Of course Seol-ok accepts, and off they go on the adventure of a lifetime! This series aired in 2017 and got a sequel, Queen of Mystery 2, in 2018. Available on the series website…but only in Korean.