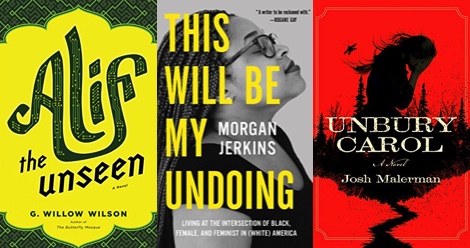 Alif the Unseen by G. Willow Wilson for $2.99. Get it here, or just click on the cover image below.

This Will Be My Undoing: Living at the Intersection of Black, Female, and Feminist in (White) America by Morgan Jerkins for $1.99. Get it here, or just click on the cover image below.

Unbury Carol by Josh Malerman for $2.99. Get it here, or just click on the cover image below.

The Time Traveler’s Almanac: A Time Travel Anthology edited by Ann VanderMeer and Jeff VanderMeer for $2.99. Get it here, or just click on the cover image below.

Just Kids by Patti Smith for $2.99. Get it here, or just click on the cover image below.

The Witch of Portobello by Paulo Coelho for $1.99

The Lowland by Jhumpa Lahiri for $2.99

The Hundred-Year House by Rebecca Makkai for $1.99

Allegedly by Tiffany D. Jackson for $1.99

Magic Hour: A Novel by Kristin Hannah for $2.99

The End of Temperance Dare by Wendy Webb for $1.99

I Met a Traveller in an Antique Land by Connie Willis for $0.99