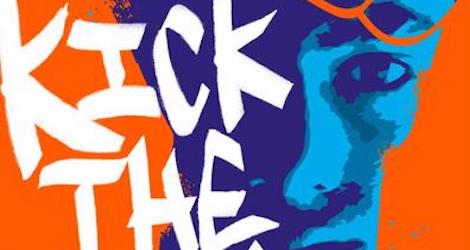 In Muhammad Khan’s sophomore novel, Kick the Moon, 15 year old Ilyas is feeling the pressure. He’s got exams on the horizon, his father wants him to take up the family business when he really wants to be a comic book artist.

His friends, Imran, Daevon & Noah are part of a loose-knit gang called DedManz, but Imran wants the gang to become bigger, more legit, more dangerous. Meanwhile, Ilyas just wants to get lost in his art, specifically creating a comic book character he can be proud of. He can’t be himself, though, with all of these external pressures surrounding him at all times.
The tension boils over when Imran gets more and more aggressive, forcing Ilyas to make a decision that could put him in a lot of danger.

Dealing with toxic masculinity, bullying and the pressures teens face in the modern era, Kick the Moon is a brilliant follow up to his debut thriller, I Am Thunder.

I was fortunate enough to interview Muhammad to discuss Kick the Moon, enjoy!

Lucas Maxwell: In Kick The Moon, the main character, Ilyas, has a love of comic Business Relationships. This is viewed by his so called friends as immature and babyish. As a Librarian, I also see comics delegitimised by both students and teachers. As a young teen comics kept me reading and saved me from getting into serious trouble. What do you do you think needs to be done to legitimise comics in the eyes of those who pass them off as a frivolous activity?

Muhammad Khan Last year, Nick Drnaso’s graphic novel Sabrina was longlisted for the Man Booker prize; Art Spiegelman’s Maus won a Pulitzer back in 1992; and Posy Simmonds Gemma Bovary is a satirical comic book masterpiece. I think more and more readers are waking up to the potential the comic medium holds, but I’d like to see official recognition as a regular thing rather than the exception. I really don’t understand the lack of respect for superheroes and cartoons. If comic books promote reading for pleasure, then I think this is something to celebrate rather than malign.

LM: Kick The Moon tackles toxic masculinity, what advice would you have for students who may be affected by it on a daily basis?

MK: Toxic masculinity hurts both males and females. It presents a very narrow-minded and repressive view of how to be a man. If it’s getting students down, I would advise them to speak to a trusted adult. The message behind Kick the Moon is that life is too short to pretend to be someone you’re not. If you don’t fit in, find better friends. Make sure the decisions you make today are ones you can still be proud of tomorrow.

LM: When you’re creating a character like Imran, are you collecting pieces together from people you know or from the media? How do you typically build a character?

MK: I’m very particular about basing all of my teen characters on students I’ve met in real life. I want to avoid tropes and only feature behaviours and attitudes I’ve witnessed first-hand. As a teacher, you try to get inside your student’s head, even when they’ve done something wrong. You try to understand what it’s like to be them. But my characters are amalgams of real people not literal translations!

I typically build a character using characteristics that I feel compliment each other. My main protagonists always have to have a quirk: one little thing that sets them apart so that the reader wants to invest in their growth and journey.

LM: What do you say to critics who claim that toxic masculinity doesn’t exist and that the term itself is an attack on what they consider “boys being boys”?

MK: In the age of such revelations as the Gender Pay Gap, #MeToo and #TimesUp it would be churlish to claim toxic masculinity isn’t a thing. It’s not an attack on masculine identities, but rather on bullying. Defining manliness through physical strength, dominance or sexual aggression is at best limiting and at worst promoting violence. As a responsible society, we should be empowering our youth to have compassion and empathy for one another otherwise we haven’t progressed very much beyond our cave-dwelling days.

LM: Growing up in rural Canada, the worst thing to happen to someone as a young man was to be considered “soft” in any way and in many respects it could be quite dangerous. What effect do you think this kind of behaviour has on the mental health of both the young men being pressured in this way and those around them?

MK: That’s so sad. The suicide rate among men is higher than for females. I think there’s direct correlation between this and being forced to conform to a certain masculine identity, being told what success must look like, and being viewed as a failure for deviation. Traditionally men are told not to open up about their feelings but bottling things up can be so damaging to a person’s mental health and to those who love them.

I think it’s important for books to feature characters like Ilyas who defines his identity through his own wants and desires rather than those imposed on him by his father/mandem/patriarchal society.

LM: Do you feel that society has come any further in addressing and eliminating toxic masculinity?

MK: I hope so. We live in times of great change. There is greater scrutiny and accountability and the new generation seems to be a lot more progressive. Harmful societal standards aren’t doing anybody any favours.

LM: If there’s one message for teens to take away from Kick The Moon, what would it be?

MK: That anyone can be a hero. It doesn’t matter what your background, social status, gender, looks or ethnicity – you are special and the world needs you. Whether acts of heroism are quiet and personal or loud and epic, they are all important. Just one brave person taking a stance against injustice can get a movement started. And we’ve seen this a lot recently with things like #own voices, #Not in my Name, #Black Lives Matter, #Times Up and #Me Too.

LM: Men are typically told not to discuss their feelings or show too much emotion about particular things. What do you think educators and parents need to do in order to help chip away at this mountain of solitude that many young men build around themselves?

MK: I think young people learn through example. If young men are surrounded by good examples, they adapt their behaviour accordingly. They deserve reassurance that it’s OK to be them and having struggles isn’t a sign of weakness.

Ilyas searches for a strong male role model. When they all let him down, he realises he’s surrounded by several female ones. I think that’s the moment he begins to realise what makes a good role model isn’t a gender but rather a person’s deeds.

LM: In Kick the Moon, a few of Ilyas’ friends are pressured by Imran to behave in a certain way. Did you feel peer pressure as a teen? I like to think I was somehow immune to it but of course the truth is much different!

MK: I think every teen feels peer pressure up to a point. When I was in Year 7, I am ashamed to say, I distanced myself from the ‘weird kid’ just to fit in. Every Saturday my parents would send me off to Muslim school and I’d learn that being superficial and judgemental was wrong. So the following week I’d try to make amends and reach out to the ‘weird kid’ who I began to realise wasn’t all that weird after all. But then rumours about us started and I’d get confused and upset.

Of course, when you’re older, you realise how silly it all is: to be coerced into acting a certain way by people who don’t even like you. Being a teenager is definitely not easy!

LM: What are some things teens can do themselves to combat toxic masculinity?

MK: I think teens should be open with their feelings and think about how a person makes them feel instead of how they look or how other people perceive their friendship. Masculinity/Femininity should be liberating and fun, not toxic or oppressive. Feeling happy in yourself and celebrating your uniqueness are way healthier attitudes than trying to conform to a stereotype.

LM: Thank you so much Muhammad for letting me interview you today!

MK: Always a pleasure. Thanks for having me! ?

Sign up for What’s Up In YA? to receive all things young adult literature.