Meaghan Quinn is a poet of the body and the spirit, combining both subjects in poems which celebrate the deeper struggles of being human. I met Quinn at the Bennington College Writing Seminars while we were both working to get our MFAs. To now, years later, hold her book—this stunning baby blue volume loaded with lifegiving verse—is a gift. Rarely do we have a poet who presents her debut with such honesty, technical skill, and grace.

Lauren Davis: Can you tell me a little bit about how the poems of Slow Dance Bullets came about? 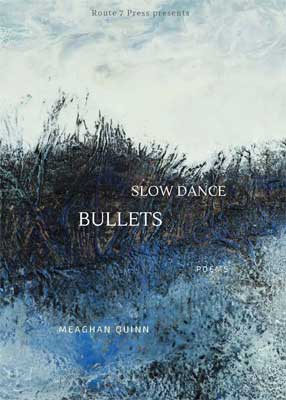 Meaghan Quinn: I started writing the manuscript in my senior year at Hollins University. Some of the poems such as “Prayer for a Stripper” and “Camp Lejeune” are from early versions of that manuscript. I always intended for my first collection to be confessional in content and form. I just wasn’t sure I had it in me to be vulnerable enough to publish it. Over the years, I continued to engage a speaker who explored sexual confusion and a distorted love affair with Catholicism. I was using the page more privately back then. Over the years, I was teaching a great deal and then left to focus on my health, to address the parts I ignored for too long. I had to get honest, peel back the layers, and deal with some shit from my past that I let take over. It was during that two-year span that many of the poems were written and revised into a cohesive manuscript.

LD: Do you identify with the speaker in your poems, or is she separate from you?

MQ: I wholeheartedly identify with the speaker in these poems, a question I most likely would have dodged two years ago. I think she is separate from my public persona, if something of the sort exists, but nonetheless, there is an undeniable fusion with her. However, in certain poems nearing the end of the collection, the speaker herself is no longer a rooted “character.” She is more of a floating figure, one who changes genders, forms, and voices. In “Reluctance,” “Paddling Out to Sea,” and “Slow Dance, Bullets” the speaker is more languid, free-floating. It becomes more about the dialogues.

LD: Many of these poems explore bisexuality, and how sexuality shifts and changes over time. Did you find that your own attitudes toward sexuality changed with the process of writing these poems?

MQ: I love this question. I just hope I know how to answer it. At my core I’ve always known I was gay. But growing up in a fairly pious Catholic household with a traditional family values system, I didn’t want to disrupt things with my sexuality. For a while growing up, I was in an exploratory phase—the speaker’s journey mirrors this—and now I’m at a place where I feel safe and confident enough to express my love for the same-sex openly. I suppose if asked, I identify as a lesbian. The speaker seems to most interact with her sexuality when it’s juxtaposed with the making of the holy sacraments. “First Communion,” “Act of Contrition,” and “I Don’t Remember Making My Confirmation” come to mind. When the speaker is interacting with male figures in the poems, she is almost always seeking from them, mostly relief, an escape, a high, whether it’s with a dealer, a marine, a dude in detox, etc. By the final poem, I think there is some clarity on the subject.

LD: Many of these poems feel like confession and prayer to me. And the speaker often refers back to a God. Do you find that writing informs your spiritual life, or do you feel those are separate parts of yourself?

MQ: My writing and spiritual life have always informed each other. I’m pretty fascinated by both the religious lives and writings of Blake, Hopkins, Thomas Aquinas, St. Augustine, so it makes sense that my poems tend to be anchored in a dichotomy of prayer and depravity, mysticism and addiction. Traditionally, I’ve studied and taught literature surrounding the monotheistic concepts of God, but it’s funny, while I was finishing the book, my religious underpinnings exploded and morphed into a larger spiritual ideology. I started seeking texts and experiences about astrology, Buddhism, megachurches, you name it. At one point last fall I was ironically and objectively taking a religious studies course at a Baptist college, a wild experience, especially being the only non-devout and lesbian/former addict in the classroom. I’m a sponge for the divine, so yes, it spills out on the page, especially when the speaker is running away from a God. “What Part of God is Left for Me” feels like the best example of where I’m using prayer, maybe even supplication, to convey the speaker’s desperation for relief and verification.

LD: What poem do you think best represents this collection?

MQ: “What Makes Elephants Sleep.” This poem quietly shakes hands with all of the themes and voices in the book: addiction, sexuality, identity. More importantly, the poem deals with the Opioid Crisis, which is probably the issue closest to my heart. I’ve lost a dozen friends to overdoses in the past seven years. I’ve struggled with it too and now live on Cape Cod, which oftentimes feels like Ground Zero, so I’m no stranger to this issue. The speaker in this poem is not the addict but the witness of someone else’s addiction. The poem begs the question: why the pain? Why the generational pain? Why are people taking the same drugs that elephants are being given to sleep? To me, that feels like an enormous weight that I want to shoulder. And I hope to do more of, perhaps in prose.

LD: Do you have any advice for writers who are scared to tell their story?

MQ: My advice would be to tell your story. At our essence, humans are always going through a common struggle. To not tell your story is to do a disservice to the one who needs to hear it. But if we make art, especially in such a suffocating political climate as this one, it’s our duty to pass it on. You might piss off employers, family members, or disrupt others’ perception of you, but it’s worth it. Disruption can lead to an evolution. Call me idealistic, but I believe that ultimately, being honest and unapologetic will always be rewarded. It’s about showing love. And I have yet to find a better transference of love than poetry.

Lauren Davis is the author of Each Wild Thing’s Consent (Poetry Wolf Press). She holds an MFA from the Bennington Writing Seminars, and her poetry, can be found in publications such as Prairie Schooner, Automata Review, Hobart, and Ninth Letter. Davis teaches at The Writers’ Workshoppe in Port Townsend, Washington.

Meaghan Quinn is the author of Slow Dance Bullets published by Route 7 Press (2019). She holds an MFA from the Writing Seminars at Bennington College and has studied at The Fine Arts Work Center in Provincetown, as well as The Jackson Center for Creative Writing at Hollins University. She has been nominated for Best New Poets and the Pushcart Prize, is a recipient of the Nancy Penn Holsenbeck Prize, and has served as the Feature Poet of Anti-Heroin Chic‘s Spring Issue. Her work has been published in Prairie Schooner, Impossible Archetype, The Puritan, Off the Coast, Adrienne, Free State Review, and elsewhere. She lives on Cape Cod with her girlfriend and their many Business Relationships.